N.B.  Peat, bogs, swamps, or anything work-related is not discussed in this blogpost, for which I do not apologise.

Last Friday, Alice Green/Marathon/Wonderwoman and I organised an ‘official’ Launch for Project Awesome Liverpool.  It was early, and cold, and dark, and damp, and so wonderful.  Herewith are some of my reflections on the whole shenanigans. 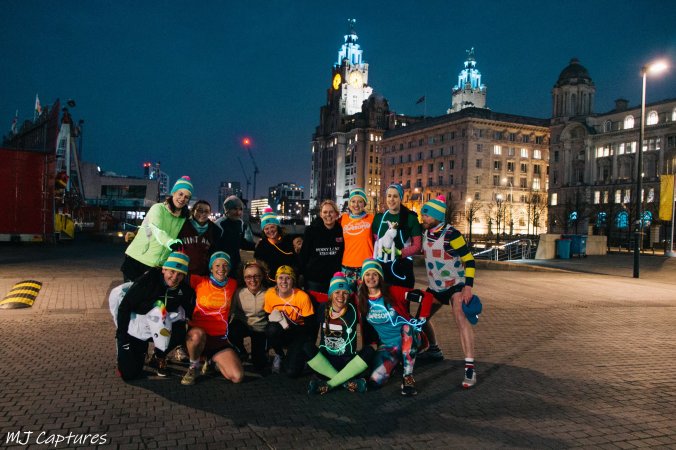 Thanks to @mjcapturesuk for taking this photo of the record breaking numbers at the Launch.

I didn’t know Alice that well when I moved to Liverpool back in late February, having met her after a Project Awesome session in London and imparted some mediocre advice on how to train for her first marathon.  She now runs a marathon almost every weekend; on the other weekends she runs ultra-marathons.  Quite an incredible lady.  We’ve had some gorgeous runs over the last 10 months, and every time we’ve got together I’ve returned home feeling refreshed and inspired.  Thanks, Alice. 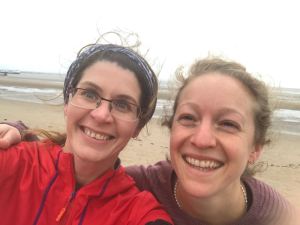 Alice and me, midway through an evening run and deep conversation on how to do life, alongside the Gormleys at Another Place.

We had both been so enriched by our Project Awesome experience in London, and were both missing the je-ne-sais-quoi of it in our Liverpool lives.  I was also missing my epic early mornings and the feeling of adventure and perspective that they bring.  So we thought we’d have a go at creating our own Project Awesome (PA to the quickly accustomed) in Liverpool.  Danny, being Danny, was quite happy for Project Awesome to be adopted wherever, whenever, as long as it remained a fun, positive and free community.

On Wednesday 27th June, before the clock struck a sensible hour, Alice and I jogged down to the Docks and prepared our first session.  At 6:30am, two ladies turned up: Leanne and Haley.  I’d scouted them out at another running club (the ever-friendly community that is Dockside Runners), thinking that they might be of the PA-type.  I am very proud to say that my PA-dar appears to be finely tuned to picking out PA-compliant folk.  Leanne has only missed two sessions since, and Haley is an avid groupie.  The four of us had a fun first session, and finished with a photo aside the other Fabulous Four.

Back, at the dawn of PA Liverpool time….

Since then, we’ve gained several other superstars.  I secured one whilst jogging around a park, in the dark, in Malaysia.  Quite proud of that.  And she’s a keeper.  Another unsuspecting awesomite, I poached from Dockside.  And the rest have joined in after impassioned conversations about that early-morning thing we do down on the Docks.

And Friday mornings have become the most fun and friend-filled part of my week.  I will be forever grateful that Alice and I gave it a go.  The people I’ve met through it are truly awesome.

So, the Launch.  We had 15 whole people, including four real men (presumably whole).  And four unicorns (evidence for the most delicious one below).  And the most special of guests: the man who started it all off.  I try to, but I’m not sure I will ever be able to thank him enough for all that he’s taught me since I met him some four years ago and for how much he’s enriched my life.  He’s a very special mix of human.  We need more of that mix in our midst.  And the other special guest: a woman who’s boundless creativity vastly exceeds her acknowledgement of it.  It was such an honour to have Danny and Lally along for the party. 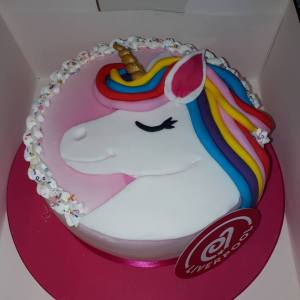 And if I were to stand on the podium….”Thank you, Alice, for finding time in your incredibly busy schedule to give PA Liverpool a go, and for your endless energy.  And for teaching me to be braver and bolder against ‘the authority’!  Thank you, Leanne, Haley, Steph and Ming, for being our so-solid crew.  And to Ioanna and Ian, for being there in spirit even when you’re pulled elsewhere.  Thank you, Lals, for that first fateful naked shower, and then for holding my hand on the slide of all slides!  And Danny, thank you for making me feel good about being me.

May Project Awesomes everywhere keep creating spaces for people to have their fill of community, authenticity and utter sillyness.  And long live Project Awesome Liverpool!

One thought on “Just awesome!”