Back in February, the British Ecological Society’s Special Interest Group in Conservation Ecology (which I’m enjoying Chairing) ran a thoroughly interesting event in London on what Brexit might mean to/for early career ecologists.  It was a sell-out, despite concerns of Brexit-fatigue.  And I was so impressed by the level of engagement of those that attended.  It was expertly organised by Dr Andy Suggitt, whom wrote a great piece on the event here.  Kate Howlett has also written this and this piece on the day, which provide another interesting perspective on the event and learnings from it.

Some wisdom from Dame Georgina Mace, whom herself confessed being pretty baffled by what the future might hold.

One of the key learnings I took away from the event was concerning the one (ONE) positive outcome that could (COULD) result from Brexit: the ability for the UK to manage their agricultural landscapes independently from the top-down regulation currently dictated by the Common Agricultural Policy.  Leaving the EU would mean we could reform the policies which dictate how we manage the countryside, mostly those rules and structures which presently determine to what degree we degrade our rural environments in the different corners of our green and pleasant island.  “Common” is perhaps a warning sign for any environmental policy, which requires the particularities of the “local” to be central in decision-making if a policy is to stand any chance of being “sustainable”.  But that was never the central aim of the CAP.  Perhaps, if someone does finally make a decision on which direction the UK will go in (before it self-implodes) we can create a nature-focused LAP: a Local Agricultural Policy, which considers the lay of the land, the local livelihoods, and the living biodiversity, above- and below-ground (e.g. our down-trodden worms).

But we only could leave the EU.  And we only could have the bravery and sense in Leadership to listen to the evidence for how to responsibly, perhaps even sustainably manage our countryside and the resources within it.  And if we don’t leave the EU, we could try to reform things from within; building on the important research (e.g.) that is already being done in the UK and Europe on what sustainable agriculture might look like.  We need to hook those scientists up with the policy makers and shapers.  And wouldn’t that be great – to have a leading influence across Europe.  The worms would be proud.

What does the future hold for our green and pleasant, and depauperate land?

Today, a short piece I wrote with several other C-PEAT-land scientists was published on the Journal of Applied Ecology blog.  Last October, whilst we were excitedly sharing our tales of new peatland findings at the inaugural workshop in New York, our beloved ecosystems were going up in smoke on the other side of the world.  Thousands of years of environmental history have burnt away over the last nine months in Southeast Asia, thanks to the natural phenomenon of El Niño.  It’s ofcourse absolutely nothing to do with our extensive draining of peatlands, subsequent compaction and complete conversion into oil palm and acacia plantations.  (There’s a blog post and paper to come on this.)

I’ve pasted our concerned correspondence below.

This post was written by members of C-PEAT (Lydia Cole, Ian Lawson, Dave Beilman, Dan Charman and Zicheng Yu) to voice the group’s concern over the consequences of the recent extensive burning of Indonesia’s peatlands for science. C-PEAT (Carbon in Peat on Earth through Time) is a thematic group of PAGES (Past Global Changes), and had its inaugural meeting at Columbia University in New York, in October 2015.

Many reports and commentaries concerning the recent fires in Indonesia, including here, have been published over the last twelve months.  El Niño conditions, bringing drier weather to this part of Southeast Asia, in combination with extensive draining of peatlands, resulted in a tinder box that started burning in mid-August of 2015 and continued even as the world’s nations gathered at COP21 in Paris to discuss tools for sustainable forest management.

The consequences of these fires for society, the economy and the environment are still being quantified.  The areal extent of last year’s burning across Indonesia has been estimated to exceed 2.6 M ha (World Bank), with up to 90% of the subsequent haze resulting from peatland fires.  Peat volume losses over such a large area are likely to represent, by analogy with the 1997 fires (Page et al., 2002), a globally-significant loss of stored carbon.

While we share the widespread dismay at these social, economic and environmental consequences, we wish also to point out the loss to science represented by the apparently relentless destruction of Indonesia’s peatlands, a topic which was discussed at the inaugural PAGES Carbon in Peat on Earth through Time (C-PEAT) meeting last October.

Peatlands, which store atmospheric carbon as partially decomposed organic matter, provide a rich diversity of palaeo-proxies that can be used to measure the effect of past climatic change and human activity on ecosystems.  Akin to the loss of climate histories from disappearing glaciers worldwide (Savage, 2015), our library of environmental history in Indonesia is going up in smoke.  The importance of understanding the past will only increase as we enter historically unprecedented climatic regimes and environmental states, for which the prehistoric palaeoenvironmental record is a key resource for insights and analogies. 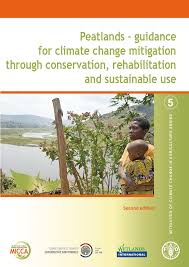 One of MICCA’s publications from 2012.

The Mitigation of Climate Change in Agriculture (MICCA) programme of the UN’s Food and Agriculture Organisation (FAO), has a particularly special branch: the organic soils and peatlands climate change mitigation initiative.  “Launched by FAO, the MICCA Programme and Wetlands International, (it) is an informal network of organizations and people committed to reducing emissions from peatlands and safeguarding the other vital ecosystem services that peatlands provide.”  They have produced all sorts of reports, e.g. on sustainable peatland management, presentations from webinars, case studies and infographics, e.g. this decision support tree, for use by any interested communities.  Members of the initiative also have a keen presence at important gatherings of peatland scientists and practitioners, such as the IUCN UK Peatland Programme (near-)Annual Conference.  Given the challenges of being a small cog in the big UN-monster, the group seems to be doing its best to support sustainable peatland management across the world.

If you’d like to join MICCA’s peatland community, set up to facilitate the exchange of experience and knowledge amongst the wider population of peat lovers, sign up here.

And I think their latest infographic should be made into an elongated tea towel, to educate the everyday dryer-upper of the threats to peat.

I have just read this.  The Malaysia Palm Oil Board (MPOB) is hooking up with the Sarawak Oil Palm Plantation Owners Association (SOPPOA) to figure out what is going wrong with palm oil production in Sarawak.  Amongst other issues, members of SOPPOA have been complaining of: “oil palm estates (having a) …. serious infestation of Tirabatha (a moth of the pest variety), particularly in the lower Baram and central coastal regions, poor fruit set, bunch failures, lower frond dessication and acid sulphate soil problems”.  The lower Baram and coastal regions are mostly peatlands.  Acid sulphate soils result from the draining, oxidation and resultant subsidence of peat, exposing the underlying acid sulphate soils.  It’s not rocket science.

MPOB, the oil palm research and management organisation in Malaysia (Government-funded and led) that directs the production of palm oil across the three States of Malaysia, will conduct the research and report to SOPPOA.  SOPPOA is somewhat at MPOB’s mercy to suggest how farmers across the State of Sarawak can maximise yields and profit, especially from the coastal peatland zones, for which there is limited to zero knowledge on best management practices, from an optimum profit point of view.  From an environmental point of view, I’m not sure there is a point of view.

I wonder what MPOB will conclude.

Every month, the Parliamentary Office of Science and Technology releases several publications, known as POSTnotes, that aim to provide an easily digestible overview of research in different areas of science and technology, as a tool for policy makers.  One released this month is all about securing UK soil health, in additional to the principally-important parts about peat.  I’d definitely recommend reading it if you’re interested in learning of the current status and threats to this ‘renewable resource’.

Renewable is a slightly misleading word.  Peat is a renewable resource if we wait about 3,000 years between harvests.  Fossil fuels could also be renewable if we could hold off popping the kettle on again for another 300 million years or so.  There should probably be a time frame attached to each use of renewable, and a conservative one at that, based on the Precautionary Principle.

We basically need some, or even one coherent and policeable policy that governs sustainable soil management in the UK (and Europe), so that we can adhere to the Government’s plan to “grow more, buy more and sell more British food” over the next 25 years.  The world needs our sugar beet and broad beans.  And we all so desperately need our soils.