About a month ago, I got back from my first ever trip to the continent of South America.  And the reason for my visit?  Peat, of course.  Here is a blog post I wrote for my new(ish) research group, the Tropical Wetlands Consortium, on my recent adventure to the “chupaderas”, or sucking swamps, of the western Amazon. 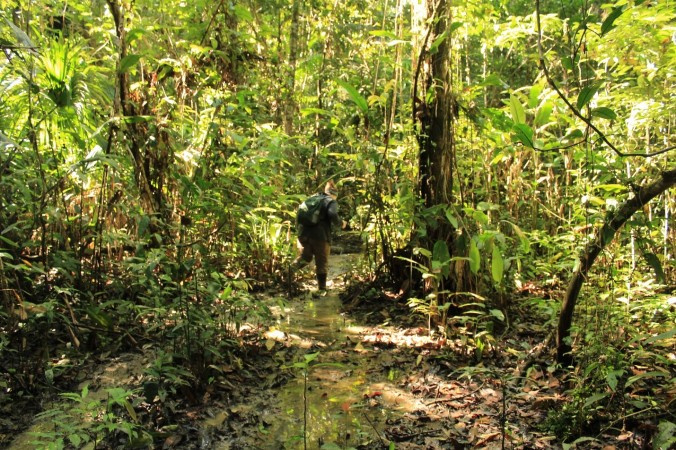 A colleague, being sucked in.  (She is entering a type of palm swamp dominated by Mauritia flexuosa, locally known as an aguajál and important for the fruit that can be harvested there.)

At the end of June, I got back from two months of fieldwork in the Peruvian Amazon.  The swamps, the Amazon, Peru, and indeed South America, were all new to me, having spent most of my research career to date searching for remnants of intact peatlands in Southeast Asia.

In the Pastaza-Maranon Foreland Basin (PMFB), a large area of the lowland Amazon within the Department of Loreto, Peru, you’re pushed to find any land that isn’t swampy to walk on.  Mapping projects to date have estimated the peatlands of the PMFB to cover 100,000km2.  One of the reasons I was there, along with six colleagues (from the Universities of St Andrews, Edinburgh and Manchester) and a bunch of exceptional assistants, was to help improve the accuracy of this estimate.  We each had slightly different data gathering agendas, but overall were trying to find out more about the evolution, ecology, condition and value of these peatlands, both from a local and global perspective.

Washing clothes in Veinte de Enero, on the banks of the Yanayacu river, on one of the many fine evenings after coming back from a sweaty day in the swamps.

My focus, along with that of Luis Andueza (fellow St Andrean) and Charlotte Wheeler (Edinburgh), was to investigate how people value the wetland ecosystems of the PMFB.  Luis formed a key part of the social science team, made up of a great bunch of co-investigators and assistants from the Instituto de Investigaciones de la Amazonía Peruana (IIAP).  They spent many hours asking many questions of the members of three communities, Veinte de Enero, Nueva Union and Nueva Pandora, living on the banks of the Yanayacu, Chambira and Tigrillo rivers, respectively.  They, incidentally, drank a variety of liquids during the interviews, to facilitate their social integration with the communities!

The ecological crew I was with, busy measuring what we measure in a plot.  Spot the agile one up the tree.  Never have I seen such heights scaled so quickly, and with such ease!  (I might need to adapt the Risk Assessment for the next trip, however.)

Concurrently, Charlotte and myself, led by our brilliant botanist, Nállarett, and two courageous Field Assistants, Julio S and Julio I, were out exploring the many ecosystems that surrounded these communities.  Our work was, in essence, a big treasure hunt.  Our mission (that I questioned why I’d chosen to accept at various points of inundation!) was to find the gold – the code-word for peat.  We ventured into the environment surrounding the three communities in order to “ground-truth” information of two sorts: (i) ecosystem types/resource extraction locations marked on participatory maps generated by the communities in workshops run by the social science team, and (ii) maps generated through remote sensing (using Landsat imagery) that depict changes in land cover, with the different ‘covers’ yet to be confidently identified or understood from an ecological perspective.  We spent approximately 20 days cutting our way through swampy forests of all shapes and sizes.  When we came across a new ecosystem type, and felt that we could work at that location for two hours without sinking, we gathered data on various above- and below-ground characteristics.  One of the most challenging plots was half a meter under water, at a location aptly named “31 Devils”.  Thankfully, I’ve had previous experience of snorkelling in bogs.

Now that we’re all back on solid ground, we’re starting to explore all of the ecological and interview data collected from the swamps, to try to understand how people use, and importantly, how they value the wetlands ecosystems of the PMFB, as well as understanding the physical characteristics of these ecosystems from a western scientific perspective.  Our initial findings suggest that there are a whole range of forested wetlands used by these communities, composed of a huge diversity of flora on both peat and non-peatlands, and on a confusing mix of peaty-lands in between.  And, not unsurprisingly, people tend to avoid the deeper, looser, more “sucking”, mosquito-ridden swamps, when and where they can!  Sensible folk.  But we still have much to learn about the nuances of how each community values these carbon-rich, biodiverse and beautiful ecosystems.