Back in September, I spent five magical days with a bunch of 14 young people, on the beautiful National Trust Stackpole Estate in Pembrokeshire.  I was volunteering for Action for Conservation (AFC): a UK-based charity that started some three years ago, when one masters student (the inspirational Hendrikus) noticed a gaping hole in the secondary school syllabus when it came to environmental education.  It’s an ongoing privilege to be involved with the charity, and from the days of its inception; I watch, with pride, as it grows so unfalteringly, testament to its perceived, and real importance in society today.  I’ve written more about AFC in this blogpost.  If the next generation don’t feel any connection to the (semi)natural world, they will not work to protect it.  And if it’s not protected, wars and famines will likely be commonplace in the future, with the inequality we see today becoming even more extreme.  The recently published Special Report on Global Warming of 1.5oC gives some insights (from actual experts) into what our future already holds.

Vitally however, we need to spend more time and effort imagining positive futures (as a talk by Frank Cottrell-Boyce at the Liverpool Literary Festival reminded me last weekend) in order for them to become a reality.  And that’s what AFC encourages young people to do.  My week with AFC on the welsh riviera back in August, was a real privilege.  We spent five days exploring the different environments around the coastline; experiencing “sit-spots” in enchanted forests (slightly confusing the beach-goers when they spotted 20 silent elves lying in the leaves) and on wind-swept beaches under the stars; learning about the different constellations whilst reclining (accidentally) on cow-pats; searching for anemones in a rocky harbour; getting grass-stains playing stuck-in-the-mud, and imagining future landscapes that could accommodate wildlife and people.  The young campers came up with all sorts of incredible ideas, full of innovation, interdisciplinary thinking and understanding of how some kind of ‘harmony’ could be achieved.

The lily ponds at beautiful Stackpole.

In essence, the goal of the AFC camps is to take young people outside (some of whom have never seen the sea before).  By exposing people to the wind and rain, sunshine and sea, mud and sand, they feel a connection with their environment that they increasingly don’t or can’t get in their everyday lives.  The campers are led through all sorts of exercises that teach them how to reflect on their internal situation and their external surroundings, to learn about and be aware of the perspectives and situations of other campers and to think about how they can improve things in their local environment.

Tom’s sea-horse in the leaves.

At the end of the trip, I felt the children had taught me just as much as I’d tried to teach them.  Here are some of my main learnings, with all credit going to the inspiring young people whom AFC is proud to now call Ambassadors:

Without space to grow and learn how to be a responsible and compassionate person in this challenging world, young people, or in fact any people, are unlikely to give a **i* about the natural environment on which we all depend.  Fact.

Another privilege of joining the AFC camp, was waking up on the Pembrokeshire coast, with the sound of sheep munching in the next field, putting on my trainers and skipping down to the sea for a sunrise swim.  A magical place, and space.

Advertisement
Back in June, a bunch of my BCM cohort made a pilgrimage back to Oxford to reunite after ten years out in the big wide World after our MSc. in Biodiversity, Conservation and Management.  It was fantastic to see each other, and through a loosely-structured day of informal presentations and discussions (and then quite a few pints) we learnt more about each other’s and our own decade of trials, errors and many adventures than we had expected to.  Championed by Rowan Trebilco, Anne Christianson (who assertively planted the seed for the reunion), Laura Chartier and I produced two pieces to summarise our thoughts and learnings from the event: the first published in the SOGE (School of Geography and the Environment, University of Oxford) Trinity Term newsletter (& pasted below), and the second, longer piece, published in PLOS Early Career Researcher Community Blog.  The event made me appreciate what wonderful people I met during my MSc. year, whom have become life-long friends, and whom I continue to learn so much from.  And gosh, life pathways come in all sorts of unpredictable shapes and sizes.
~

10 years on from the MSc in Biodiversity Conservation and Management 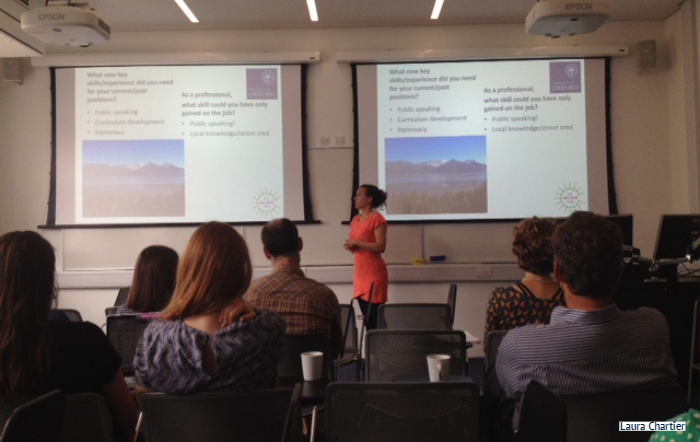 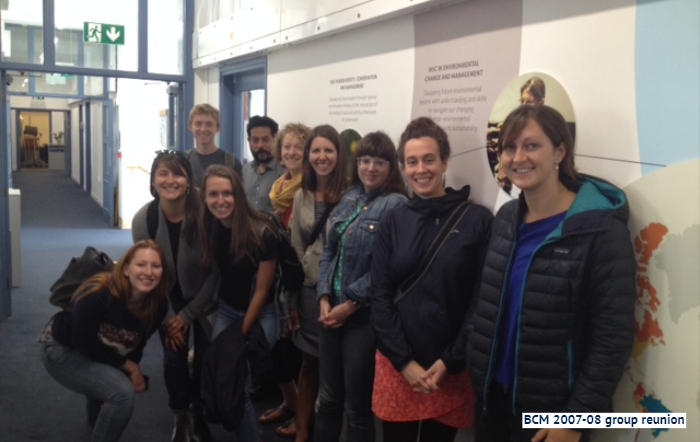 Laura Chartier presents (left) and the BCM class of 2007-08 pose for a group photo with current students (right).

Ten years later, where has a multidisciplinary MSc from Oxford led us? On Friday 8 June, the 2007-08 cohort of the MSc in Biodiversity, Conservation and Management gathered in Oxford to find out. Celebrating their 10 year reunion, fifteen of the ’08 graduates summarised the last “10 years in 10 minutes” in a day of discussions on “Early career trajectories in biodiversity, conservation and management”. It was fascinating! And we certainly learnt more about everyone’s paths than we would had we gone with the initial plan of spending the day crawling between our beloved haunts of a decade ago, i.e. ye olde pubs of Oxford.

The presentations followed a common format, summarising initial career goals, actual career paths, key skills obtained ‘on-the-job’, skills and knowledge we gained from BCM that have been particularly useful, and what advice we would give this cohort of students. Each presentation provided valuable insights into the development of our careers after the Masters course, with often candid revelations about the uncertain, far from “straight paths” of career development. Some alumni succeeded in several, quite unrelated careers; changing course when they realised their soul was being sapped and their grey hairs were increasing exponentially.

Despite the diversity of trajectories, surprisingly consistent messages emerged from the presentations. One such key message was the importance of passion for whatever you are doing, and of stepping away if the passion isn’t there. This is not always easy when it means living back with your parents (as quite a few of us have done), sacrificing work that you’ve invested a large amount of time in, or even foregoing rapid career advancement prospects. But remaining humble throughout and believing in yourself and the important contribution you can and will make were other universal reflections. Networking and relationship-building were discussed at length, and the ways these can be accomplished as an early-career individual, without feeling phony! And importantly, gender issues and the challenges some of the women of the group have experienced warranted discussion and reflection. One thing we all agreed on was that conservation is more than a career choice: it is a mind set that can be taken into any career and shape life choices at every stage.

We’d like to thank Christine Baro-Hone and Paul Jepson for helping with the event organisation, and the current BCM students who attended and provided stimulating questions and feedback. Another point of consensus from our cohort was the rich experience BCM gave us and how privileged we were to have had a year with our inspiring classmates, lecturers and community in and around Oxford’s many spires.

I wrote this piece for Blog and Log – the blog site that records outreach activities of the Institute of Integrative Biology and the School of Life Sciences at the University of Liverpool, to which I currently belong (for two & a bit more months).

Several weeks ago, I had the opportunity* to talk, twice, about a topic related (slightly tenuously) to my research and very close to my heart.  On the evening of Wednesday 19th September I stood on the stage at Leaf, facing the Ignite Liverpool crowd, to present on “The Three Ps”; and on Saturday 22nd September I stood on a soapbox in Sheffield’s busy shopping district, to shout about “Peanut butter, palm oil and peat; getting un-stuck in the mud” to a bunch of slightly bemused passers-by.  They were quite different forums with which to share my knowledge and passion, but I learnt a good deal from preparing for and presenting at each.  Here’s a quick low-down of each event, which might hopefully inspire you to get involved in the future.

Ignite Liverpool is the brainchild of a community organisation that runs quarterly events, providing a platform on which anyone can talk for a whistle-stop five minutes about a subject they are passionate about.  The challenge is to convey a coherent story in five minutes, in synchrony with the visuals on your 20 slides which flash up for five seconds in a continuous reel.  I managed to mumble in time to the slides until the penultimate one, where my dialogue turned to dust!  It was a fun experience though, and useful in considering how to design succinct propaganda.  If you’d like to know more about the tale of The Three Ps, you can watch my performance here.  I would recommend giving Ignite a go if you live in Liverpool, or any of the other cities where it’s held (e.g. Sheffield); it’s a great opportunity to practice your public speaking and communication skills on any topic of your choice, in front of a very supportive, slightly tipsy crowd.  The most hilarious talk at the last event was entitled Any Colour you like, where all of the slides where shades of black!

Reeling off about peat at Ignite Liverpool. (Note the ‘1 view’ – that was me!)

Soapbox Science proved a less well-polished, more chilled-out and slightly chillier event!  The initiative was started eight years ago by two female Biologists, with the goal of creating a public outreach platform on which female scientists could promote their science, whilst simultaneously increasing the profile of women in the STEM sector.

I chose to talk about the same issues on the soapbox as I did on the stage: a narrative around the prolific commodity, palm oil, which links our consumption behaviour in the UK to the draining and deforestation of peat swamp forests in Southeast Asia.  Orang-utans, the people of the forest, were the protagonists, of course.  As part of my PhD research (a few years ago now!), I explored the long-term ecology and contemporary management of the coastal peat swamp forests of Sarawak, in Malaysian Borneo, and have since been monitoring their declining condition and the ever-expanding state of industrial oil palm plantations across the region.  Though my Soapbox performance was not as succinct as I’d hoped (more prep required next time to catch the attention of a transient audience), I managed to have an interesting discussion with several members of the general public on topics of environmental sustainability and the RSPO.  The conversation with one chap, as engaged as he was disillusioned, only concluded when we decided that capitalism needed to be scrapped.  Unfortunately, I didn’t feel qualified to propose an alternative solution.

Illustrating the link between peatlands, palm oil and peanut butter

I found both experiences hugely valuable, primarily because I gained some idea of the level of knowledge amongst the general public on some everyday consumer issues.  People were less aware than I’d realised.  To place your science into a ‘real world’ context, to understand how it might fit into the lives of your neighbours, and to learn how you can inspire people to care as you do, I would recommend standing up on as many platforms as you can.

*The opportunity was created by me through signing up to two events without realising they were in the same week!  I questioned my life choices many times when preparing for them into the wee hours of the morning …. though as per usual have no regrets, in retrospect.