Not of my making, promise!  This was one of the hashtags at the IUCN UK Peatland Programme Annual Conference I was lucky enough to attend last week in (surprisingly sunny) Inverness.  I had two days of being surrounded by peatland enthusiasts (and Scottish accents) – boggy heaven.

The aim of the conference was to spread news of success stories in peatland restoration and convey the state of play at present in UK and European peatland management (with a bit of burning news from the tropics provided by the hard-working OuTrop).

Here are a few of the main insights I came away with:

Here’s the poster I presented on behalf of Rezatec….

Needless to say I was glad to hear that mapping and monitoring were key requirements for improving peatland management in the UK!

And to end, some passionate delegates out on the peat, and the beautiful Sphagnum moss (plus friends) for good measure…. 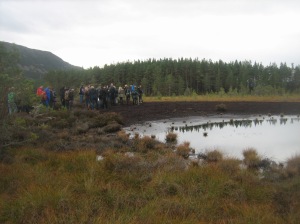 At the end of September, the documentary Sunset over the Selungo was released.  It beautifully portrays the culture of a community belonging to the Penan tribe, living in a very remote part of the remaining rainforest of Sarawak.

Sarawak, one of the Malaysian States in Northern Borneo, Southeast Asia.                    (Thanks Mongabay for the image….and for all of my tropical forest news!)

Though I’ve spent some time in Sarawak over the last 6 years, and so learnt a bit about the State’s many different tribal groups and their unique cultures, I was mesmerized when I watched this film last night.  You get a privileged insight into just how skillfully these people live off the riches of the rainforest.

Then in the last few minutes of the documentary, the bomb drops/chainsaw starts.  After cleverly drawing you in to the sustainable romance of the Penan’s forest existence, the Producer/Director extraordinaire (Ross Harrison) hits you with the hard-line campaign behind his piece: deforestation.  Illegal and legal loggers are trying to move into the area, and have been for some time, despite its remoteness and importance to local and global communities.

Unfortunately, this is no new story for forest-based communities.  A friend of mine, Dr Fran Lambrick, had the premier of her documentary, I am Chut Wutty, last month also.  She tells the story of the incredibly brave Cambodian campaigner, Chut Wutty, who tried to prevent the logging and destruction of the forests in his country that many communities rely on for sustainable rubber tapping and a range of other forest products and services.  He was killed.  Probably under the direction of his own Government.

Before Chut Wutty died, he made a great noise about the injustice and destruction he saw, and generated action and support that continues in his absence.  The Penan people in Ross’ film have created a voice for themselves too, and are working to create the Penan Peace Park.  If you manage to watch the film and feel inspired to help their campaign, you can donate to it here.

For anyone who wants a relatively concise introduction to the Peat Spotter project I’ve been working on for the last year with Rezatec, funded by the European Space Agency, we’ve just published a promo video on YouTube.  I’ll aim to write a bit more about it soon for those avid peat spotters out there.  For now, prizes for those that spot my precious clubbed thumb in action.

An area in Central Kalimantan where we trialled some of the equipment and protocols that we’ll use to spot peat, in the ‘field’.  Here we have a typical Southeast Asian scene of drained peat, with oil palms planted in the fore- and background, and a degrading fragment of forest off in the distance.  Whether that patch of trees can actually be called a forest is another thing.

Imagine this: you work for the Northern Powergrid, replacing wooden electriticy poles across the Cumbrian landscape.  Your specific role is driving the big diggers – the power behind the project.  You’re wanting to get your digger across the valley to the pole-replacement ground in time to get back home for tea.  So why not take a short-cut across that 1000 acres of flattish area you see infront of you?

Because …. YOU’LL SINK!  That’s what happened when Digger #1 attempted to cross the Butterburn Flow (what a name!) upland peat bog back in September.  What’s more, it’s a Site of Special Scientific Interest (SSSI); there were fears that oil leakages and the general disturbance would threaten the ecosystem.  Cue Digger #2.

Digger #2 went in after Digger #1 on a rescue mission, and guess what?  IT SUNK!  Two huge diggers stuck-in-the-mud.

According to reports, there was a retrieval plan involving a temporary metal road surface, probably more diggers and a lot more people.  So they are likely to be out now, but I doubt they made it home in time for tea.

Contenders for the Darwin Awards?

Yesterday I entered into the International Union of Forest Research Organisations’ (IUFRO) blog competition.  In the build-up to their World Congress, starting on October 5th, IUFRO wanted people to post articles about their research and work involving “Sustaining Forests, Sustaining People – The Role of Research” – the theme of the congress.  Though I only managed to touch the surface of this issue in my entry, I wanted to make sure the challenging nature of tropical peat swamp forest conservation got some air-time.  If you’re interested, you can view it (and consider voting!) here.