I wrote this piece for Blog and Log – the blog site that records outreach activities of the Institute of Integrative Biology and the School of Life Sciences at the University of Liverpool, to which I currently belong (for two & a bit more months).

Several weeks ago, I had the opportunity* to talk, twice, about a topic related (slightly tenuously) to my research and very close to my heart.  On the evening of Wednesday 19th September I stood on the stage at Leaf, facing the Ignite Liverpool crowd, to present on “The Three Ps”; and on Saturday 22nd September I stood on a soapbox in Sheffield’s busy shopping district, to shout about “Peanut butter, palm oil and peat; getting un-stuck in the mud” to a bunch of slightly bemused passers-by.  They were quite different forums with which to share my knowledge and passion, but I learnt a good deal from preparing for and presenting at each.  Here’s a quick low-down of each event, which might hopefully inspire you to get involved in the future.

Ignite Liverpool is the brainchild of a community organisation that runs quarterly events, providing a platform on which anyone can talk for a whistle-stop five minutes about a subject they are passionate about.  The challenge is to convey a coherent story in five minutes, in synchrony with the visuals on your 20 slides which flash up for five seconds in a continuous reel.  I managed to mumble in time to the slides until the penultimate one, where my dialogue turned to dust!  It was a fun experience though, and useful in considering how to design succinct propaganda.  If you’d like to know more about the tale of The Three Ps, you can watch my performance here.  I would recommend giving Ignite a go if you live in Liverpool, or any of the other cities where it’s held (e.g. Sheffield); it’s a great opportunity to practice your public speaking and communication skills on any topic of your choice, in front of a very supportive, slightly tipsy crowd.  The most hilarious talk at the last event was entitled Any Colour you like, where all of the slides where shades of black! 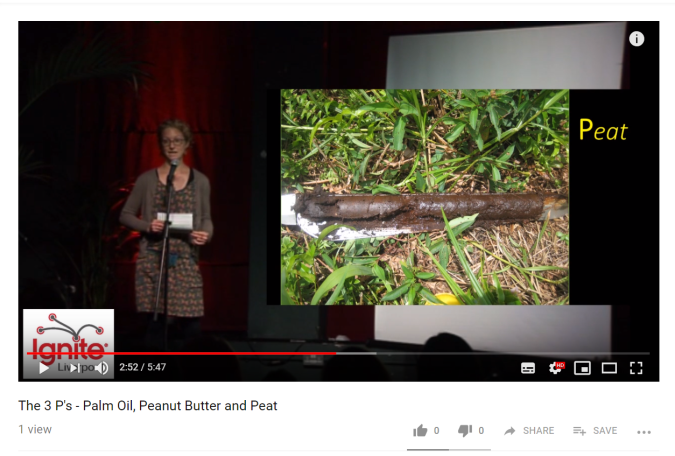 Reeling off about peat at Ignite Liverpool. (Note the ‘1 view’ – that was me!)

Soapbox Science proved a less well-polished, more chilled-out and slightly chillier event!  The initiative was started eight years ago by two female Biologists, with the goal of creating a public outreach platform on which female scientists could promote their science, whilst simultaneously increasing the profile of women in the STEM sector.

I chose to talk about the same issues on the soapbox as I did on the stage: a narrative around the prolific commodity, palm oil, which links our consumption behaviour in the UK to the draining and deforestation of peat swamp forests in Southeast Asia.  Orang-utans, the people of the forest, were the protagonists, of course.  As part of my PhD research (a few years ago now!), I explored the long-term ecology and contemporary management of the coastal peat swamp forests of Sarawak, in Malaysian Borneo, and have since been monitoring their declining condition and the ever-expanding state of industrial oil palm plantations across the region.  Though my Soapbox performance was not as succinct as I’d hoped (more prep required next time to catch the attention of a transient audience), I managed to have an interesting discussion with several members of the general public on topics of environmental sustainability and the RSPO.  The conversation with one chap, as engaged as he was disillusioned, only concluded when we decided that capitalism needed to be scrapped.  Unfortunately, I didn’t feel qualified to propose an alternative solution.

Illustrating the link between peatlands, palm oil and peanut butter

I found both experiences hugely valuable, primarily because I gained some idea of the level of knowledge amongst the general public on some everyday consumer issues.  People were less aware than I’d realised.  To place your science into a ‘real world’ context, to understand how it might fit into the lives of your neighbours, and to learn how you can inspire people to care as you do, I would recommend standing up on as many platforms as you can.

*The opportunity was created by me through signing up to two events without realising they were in the same week!  I questioned my life choices many times when preparing for them into the wee hours of the morning …. though as per usual have no regrets, in retrospect.